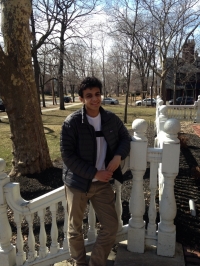 His product is called Raffle Creator (www.rafflecreator.com), and it enables fundraising groups to sell raffle tickets online along with in-person sales. “Raffle Creator lets fundraisers create a webpage, accept payments, and manage all the information they collect,” said Woodbridge, whose website has been operational since 2012.

The young company got its start during Montessori High School’s annual X-term, a two-week, student-led intensive course that encourages students to explore an area of study of their choice. Woodbridge and his peers wanted to study entrepreneurship and technology in San Francisco and Silicon Valley, but they needed to raise money for the trip.

Realizing that simply selling raffle tickets at school might raise only enough for a single plane ticket, Woodbridge developed Raffle Creator to reach a larger pool of potential donors. According to Woodbridge, the product became successful because “it lets you access so many more people, not only when you’re at events but when they’re anywhere. They can buy tickets on their phones or laptops. It lets you sell with a lot more ease.”

Using his innovation, Woodbridge raised $6,000 for his 2012 trip to California. The next year he used it to raise $10,000 for an X-term study of start-up companies in New York City. Woodbridge isn’t the only person benefiting from Raffle Creator, however. Other nonprofit groups have paid a $99 Rservice fee to use the website for their own fundraising efforts. Recently, the Pathfinders for Autism campaign in North Carolina used Raffle Creator to raise $30,000.

Beyond the early financial success, Woodbridge has gained significant recognition from Cleveland’s entrepreneurial community. In March, he represented Montessori High School in a business plan competition sponsored by the Veale Youth Entrepreneurship Forum, and beat out representatives from nine other schools. He plans to use the $1,000 first-place prize to improve the user experience on his website.

Woodbridge, who has attended Montessori schools his whole life, appreciates their unique approach. “It lets me think for myself. It lets me be myself and be independent," he said.

Woodbridge will continue managing Raffle Creator once he graduates from Montessori High School this spring. He plans to attend either Brown University or The University of Chicago next fall. He said choosing one has been difficult. Needless to say, he won’t be picking it out of a hat.

Marty Frazier is an English teacher at Montessori High School in University Circle. He earned a B.A. in English from Oberlin College in 2007, and has been living and teaching in Cleveland for the past five years.