World record attempt to be celebrated in Coventry 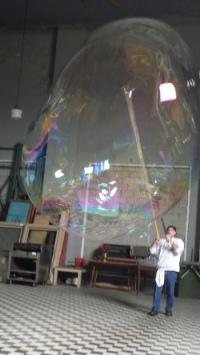 The record-breaking attempt will be made at the Ross DeJohn Community Center (located at 6306 Marsol Road, behind the Golden Gate Shopping Center, in Pearlman’s hometown of Mayfield Heights). The public is invited to cheer Pearlman on as he tries to bring the title to Cleveland.

Parker will be in town for Pearlman’s record-breaking attempt as witness and special judge. In an act of sportsmanship, Parker has agreed to allow Dr. Awesome to use her special secret blend of bubble juice, which she calls Party Bubble Big Bubble Concentrate and credits for her win last year.

Dr. Awesome, has entertained audiences for years as a bubble blower, magician and balloon twister at Big Fun on Coventry Road in Cleveland Heights. Awesome is now part of Cleveland’s favorite, Flower Clown Entertainment (http://www.flowerclown.com), where his bubble and mad scientist shows have amazed and delighted children and adults.

To celebrate this event, Big Fun plans to have both Pearlman and Parker in the Coventry Road store displaying their bubble tricks on Saturday April 26 from noon to 2 p.m.

Following their in-store appearance, the pair will move up the street to Coventry P.E.A.C.E. Park until 3 p.m. (weather permitting), where Pearlman will practice before his historic try on Sunday.

Big Fun will be distributing free bubbles to kids at the park. Organizers of the event are expecting this to be fun-filled day and invite the public to come out and witness the World’s Best! Coventry Park is located at the intersection of Euclid Heights Boulevard and Coventry Road in Cleveland Heights.

Along with Megan Colby Parker, Adam Huffman of D&A Film Production will photograph; Britt Raburn of Lyndhurst Lumber will verify the bubble wand; and Dante Centuori, director of creative production at The Great Lakes Science Center, will be on hand to measure the bubble per Guinness World Records official rules and regulations. In addition, Sean T. Ward and staff from the Mayfield Heights Parks and Recreation will be on hand to assist during the main event.

Dr. Awesome has been practicing indoors (it’s been that kind of spring) at Target Auto, compliments of Jordan Kaminsky. In case of inclement weather, a rain/wind date has been set for the following week, on May 4, at the same time and location.