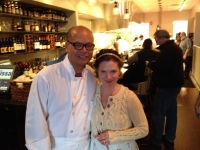 Sweet Melissa, the restaurant that has become something of an institution on Cleveland’s West Side, finally has a location on the East Side. The new Sweet Melissa is on John Carroll Boulevard in Fairmount Circle in University Heights. It’s in the space previously occupied by the North Park Grill, and it opened on March 24.

The restaurant had a "soft" opening the weekend before its official opening, and on Friday night, the place was packed.

Matthew Ullom, the owner of Sweet Melissa, said that the building’s owners wanted a restaurant in the space, and they thought that Sweet Melissa was a perfect fit for the community and for John Carroll University. “We always kept our eyes open in case the right opportunity came about,”  Ullom said. “And after visiting the site, we thought that the area was very similar to Rocky River, where our other restaurant is located.”

Ullom opened the first Sweet Melissa on Detroit Road in Rocky River in April 2008. It replaced Max’s Deli, where he had been a kitchen manager. The restaurant was named after his wife Melissa, who had also worked at Max’s, as a server. In fact, the couple met at the deli some 18 years ago. They now live in Bay Village, and have four children: Kaden, 11; Emilia, 9; Beatrice, 6,; and Eloise, 4. They also have a dog, Jake, a Labradoodle.

Ullom also owns Café Melissa in Avon Lake. “It’s smaller than the Sweet Melissas, and has a lighter feel to it,” he said. “It has more of an outdoor feel.”

As for the Sweet Melissa restaurants, Ullom said he wanted to create a place “that had healthy choices, a nice atmosphere and could be a neighborhood place.” The restaurants are open seven days a week, for breakfast, lunch and dinner.

Breakfast is served until 11 a.m. on weekdays and until 2 p.m. on Saturday and Sunday. On Sunday, both locations also offer a brunch, which includes eggs, potatoes, toast, a choice of sausage patties or Applewood smoked bacon, and a cup of fruit with a scone, all for eight dollars. “A lot of people from the East Side would come over to Rocky River for our brunch,” Ullom said. “Now we will be able to save them the trip.”

Just outside of the University Heights restaurant's entrance, in the lobby of the Fairmount Circle Medical and Office Building, there's a takeout counter where customers can order pastries and other desserts, as well as coffee.

The lunch and dinner menus feature a wide variety of options, including salads, fish, tacos, tofu, gnocchi, steaks and other entrees. The restaurant offers vegan and gluten-free items, and Ullum is himself a vegetarian.

Sweet Melissa is also known for its desserts, and the original location has won five Silver Spoon Awards for best desserts in Cleveland. It also has won awards for best chocolate cake, best brunch on the West Side and best healthy place to eat.

“We don’t have a microwave in the kitchen,” Ullum said, “so we don’t use a microwave for cooking or reheating. We also use stainless-steel frying pans, not ones made of aluminum. All of the seafood we serve is sustainable, and the chicken is all organic. And all of the packaging materials we use are recyclable. Most of the food is also locally grown or produced.”

Sweet Melissa caters to families, and its children’s menu offers an entrée, side dish,  drink and a treat, all for just six dollars.

Ullom spent several months getting the restaurant ready to open. “We spent a lot of time, energy and money to make sure the community is proud of it,” he said. Jen Graham, operations manager for all three of Ullom’s restaurants, added, “We want to bring you the best possible food in a great atmosphere. I think people will be very pleasantly surprised.”

“There’s no other place like this,” Ullom said. “It doesn’t matter what you are in the mood for, because you’ll always find something you like here.”