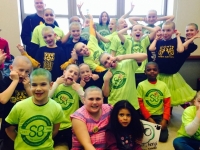 According to Krissy Dietrich Gallagher, organizer of the Cleveland Heights St. Baldrick’s event, the Heights community banded together to raise nearly $109,000 for this volunteer-driven charity, far exceeding the original goal of $60,000. St. Baldrick’s funds the most promising research to find cures for childhood cancers and give survivors long, healthy lives.

Gallagher encouraged students and teachers to participate as teams for the head-shaving event which took place on Sunday, March 16, at the Cleveland Heights Community Center. Boys and girls of all ages from CH-UH and Shaker Heights public and parochial schools joined the effort. Gallagher's son Austin, a two-time cancer survivor and a first-grader at Fairfax Elementary School, helped garner support for the Fairfax team, which led the pack in fundraising, with $25,495.

Local salon owner Alex Quintana and his crew from Quintana’s Barber & Dream spa, as well as Shawn Paul Gustafson, owner of Shawn Paul Salon, and his enthusiastic staff, worked the better part of the day shaving and cutting off locks. Much of the shorn hair was donated to organizations that make wigs for cancer patients who have lost their own hair.

Some children were so moved by the heartfelt effort that they spontaneously decided to have their heads shaved that day.

Those in attendance also raised money through bake sales and an American Girl doll raffle. The winner of the raffle, Rachel Hren, is the sister of one of the shavees. Simone Quartell, a Heights High graduate who works for American Girl, donated the doll.

Shavees walked away with a button that said, “Ask me why I’m bald,” to help continue the conversation. Gallagher succinctly expressed her gratitude by encouraging the community to “hug a bald person today!”

This year's event  raised more than twice as much money as last year. It was held in honor of three CH-UH students: Austin Gallagher; Fairfax kindergartner Becca Meyer, who is battling a brain tumor; and Roxboro Middle School seventh grader Garrett Gulden, who is battling leukemia. Each of the honorees had family members who participated in the shaving, including Gulden's father and brother and Meyer's younger brother Josh and fourth-grade sister, Carolyn, the event's top fundraiser.

Greater Cleveland is a national leader in St. Baldrick's events and is expected to raise more than $700,000 this year. The Heights community raised an additional $15,000 on Sunday at a separate event held at the New Heights Grill in honor of the late Seamus O'Connor.

Read more about the participating teams at www.chuh.org/news/detail/2014/3/13/students-and-teachers-shave-heads-for-cancer-research.