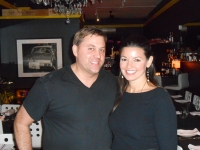 Jim Patsch and Gia Ilijasic at their new restaurant, Gigi's on Fairmount.

For many years, Gia Ilijasic and her fiancé, Jim Patsch, had dreamed of opening a restaurant. Finally, on Nov. 5, that dream came true. The couple opened Gigi’s on Fairmount, located in the Fairmount Taylor Business District in Cleveland Heights, in a space formerly occupied by a furniture store and a flower shop.

Gigi’s—the name is taken from the nickname that Ilijasic’s family gave her—is a beautiful “wine café” that has a full bar menu and also serves soups, salads, panini sandwiches and “small bites,” including olives, cheese and charcuterie. Bruschetta boards are the house specialty. Patrons can pick four items from a list that includes smoked salmon, prosciutto, house-made chicken-liver pâté and house-made trout pâté.

“We wanted to create a place that has healthy, affordable, good food that mixes with wine,” Ilijasic said.

Jesse Mendoza, who was formerly at Luxe Kitchen and Lounge in Gordon Square, is Gigi’s chef. All of the restaurant’s bread and pastries are from The Stone Oven, and most of the food is local and organic.

Both Ilijasic and Patsch said one of their primary goals is to serve the neighborhood. “We want to fulfill the wants and wishes of the community,” Ilijasic said. If someone comes in and wants a specific wine or liquor that Gigi’s doesn’t carry, they will order it so it will be there the next time that customer stops by. “Everyone’s a VIP,” Ilijasic said.

Though the restaurant seats only about 45 people, it has a charming look. Large mirrors adorn both side walls, and there’s a photo at one end of the room that shows Patsch’s parents on their wedding day. On another wall is a photo of Ilijasic’s mother at age 14. The ceiling is covered with gorgeous chandeliers.

In addition to the food and wine, Gigi’s is offering live music on Saturday nights and will hold wine tastings on the first Monday of every month. When the weather warms up, Ilijasic and Patsch plan to install patio tables in front of the restaurant.

Ilijasic said she has been interested in the restaurant business since she was studying fashion design at Arizona State University in Phoenix. While in college, she worked at a restaurant called Roxand. Later, she moved to New York City where she worked at Table d’Hote.

Patsch attended Ohio University, where he was a theater major. After graduation, he spent about 20 years in the financial world. “I always had a passion for the restaurant business,” he said. “I’ve worked at several restaurants over the years.”

The couple, who live on Torrington Road in Shaker Heights, met nine years ago and hope to marry in the not-too-distant future.