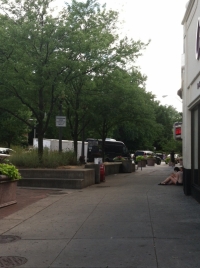 Fewer teens congregate around Coventry Yard since the curfew.

After Cleveland Heights instituted a curfew last year, Youth of Coventry (YOC) set out to change it.

The group formed last June after a highly publicized flash mob disrupted the Coventry Street Fair. Following the incident, Cleveland Heights City Council instituted a curfew of 6 p.m. for anyone under 18. The curfew originally applied to the Coventry and Cedar Lee commercial districts; Severance was added later.

“We believe [the curfew] is a temporary solution to a permanent problem,” said Nora Eagan, a founder of YOC. “Instead of keeping this extreme curfew in place, we would like city council figure out a more permanent solution that everyone can be happy with.”

“I think it’s really unreasonable for the city to expect that they can take away the two biggest areas where kids hang out—Cedar Lee and Coventry,” Eagan said. “By shutting those down, it gives kids no options to go and gather at a big place.”

YOC members met with Council Member Bonnie Caplan to build support for their position. She suggested they organize formally, and in October 2011 YOC received its Ohio Articles of Incorporation. It is now working to receive federal tax-exempt status.

“It’s an interesting and diverse group. They ceased having officers and now take a group approach to their issues,” Caplan said. “Their mission is to give a voice to youth."

Eagan said she feels council has been supportive of her group. “I understand they’re under a lot of pressure because obviously they need to listen to all the adults and have to be concerned about the kids,” she said. “But, I’m grateful that city council has given us a chance to speak [and is] listening to our opinion."

Caplan said, however, “City council has no plans to address the curfew. Businesses are happy about the curfew but kids aren’t. They’re very disappointed. They came in during the winter asking whether the curfew can be changed and the majority of the council was not inclined to think about it.”

In addition to lobbying for changes in the curfew, Eagan said the group is organizing fun events for the summer, such as ultimate Frisbee games and water fights. But she feels kids are even more limited now with the installation of new security cameras in the Cedar Lee district. The cameras were a response to a series of late-night break-ins on Lee Road.

“The cameras are kind of a blessing and a curse,” Eagan said. “It’s definitely great for all the businesses, but it enables the cops to come break up a group of kids that could possibly be walking home. It’s hard to go out and be with your friends when they crack down and you can’t hang out with anyone.”

The group meets on the first Sunday of every month, and often ends meetings with a game of Frisbee. YOC communicates through Facebook, flyers and word-of-mouth.

Caplan said of the group members, “They’re trying to set up some activities that would attract other kids from the Heights. They actually helped clean up the park in the community. They’re always looking for activities to help with.”

YOC members aren't sure how to change the curfew. They would like to work with city officials to come up with a solution to benefit everyone, Eagan said. That may include setting up a place for teens to go for fun or changing curfew exceptions to allow kids to still visit restricted areas, with the understanding that if they’re disruptive, they may be asked to leave.

The group will continue to attend city council meetings and meet with other community members to discuss modifying or eliminating the curfew.

“The first step toward making our goals come true is getting more kids involved,” Eagan said. "Young people are a large part of the community, and no one really speaks for them.”

To become involved in the Youth of Coventry, contact Nora Eagan at 14eagnor@hawken.edu.

Should the curfew be changed? Let us know what you think by participating in our Daily Question Poll.

Yelena Tischenko is a senior majoring in magazine journalism at Kent State University and a Heights Observer summer editorial intern. Simone Jasper, also an intern, contributed to this story.