Celebrating History Through Drama at Noble 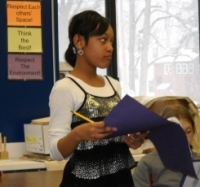 As fifth graders head for the cafeteria at Noble Elementary, several girls take a different route. They eat lunch at large tables in Nancy Eisenberg’s Art Room. The girls, members of the Young Ladies of Noble, have given up their lunch hour to rehearse a play that they will perform at the school’s celebration of Black History Month. After cleaning away crumbs and pushing tables aside, they retrieve scripts in brightly colored folders and get their pencils ready to make notations.

The catalyst for all this activity is David Hansen, father of Noble second grader Zelda Thayer-Hansen. The playwright and theater educator has written “The Lady,” a 10-minute play that merges personal narrative with history. In telling the story of Michelle Obama’s family history, Mr. Hansen has transformed daily life into myth.

As Mr. Hansen runs through the play, the audience is drawn into a series of vignettes that present historic moments. The girls portray an enslaved woman and her young son at the moment of emancipation, a railroad porter who notes the differences that exist between the North and the South during the early decades of the 20th century, and a working couple from Chicago who marvel that their children are studying at Princeton University. One lucky girl plays First Lady Michelle Obama.

“I wanted to write an educational play that celebrates the Black middle class,” said the playwright. “The progress of one African American family over the history of the United States provided an excellent blueprint for achievement.”