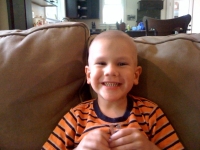 The Make-A-Wish Foundation recently completed construction on a dream treehouse for 4-year-old Austin Gallagher, who was diagnosed with bilateral Wilms tumor at 10 months old.

A custom-built treehouse, completed this fall, by Make-A-Wish Foundation volunteers, is a dream come true for 4-year-old Austin Gallagher, who has cancer of the kidneys.

Even before entering kindergarten, Austin has already lived through more hospital visits, CT scans and surgeries than many people do in a lifetime. In 2007, when a visit to the doctor showed something unusual in his X-ray, one pediatrician recommended a trip to see a pediatric cardiologist. After thorough investigation, parents Mark and Krissy Gallagher received Austin’s diagnosis: bilateral Wilms tumor, which affects both kidneys and usually requires partial or complete kidney removal.

Three years, six abdominal surgeries, and 130 days in the hospital later, Austin became one of about 200,000 children Make-A-Wish has reached out to during the past 30 years.

The organization’s volunteers designed and constructed Austin’s dream treehouse, which boasts two shiny yellow slides and a fireman’s pole, along with shutters, shingles and a 20-ft. x 20-ft. wooden deck, Krissy said. On the day, the construction was revealed, volunteers brought 100 colorful helium balloons for Mark to attach to the finished project, inspired by the floating house in Austin’s favorite movie, "Up."

Krissy said that the treehouse was completed in October, but it had been Austin’s big wish since December 2009.

"He looked up at me one day out of the blue and said ‘Mom, I want to build a treehouse in our backyard,’" she said. "It became something that we talked about and had plans for, something to look forward to."

Fighting serious illness makes these events and holidays hold special significance, according to Krissy, who documents birthdays, heart-wrenching doctor visits, and memorable moments in detail on her blog, krissygallagher.wordpress.com.

She writes: "I feel like we’ve been through so many years now of extra-special Christmas celebrations or Easter hunts or birthday parties, all planned and executed with a lingering fear that each one could be our last."

For Christmas this year, Krissy will share her own wishes for Austin, as well for her 6-year-old son Braedan, with what she calls "wishing stars." The stars, made from wood and construction paper, bear handwritten messages of humor and strength.

Krissy has hung up countless wishing stars in Austin's room made by family and friends, to remind him of all the people who care about him. From sleepovers and cartwheels to a wish that Austin and Braedan will be able to take their grandchildren fishing someday, the stars inspire optimism, laughter and hope.

The family has received generous support from the entire community, Krissy says, but it’s clear they intend to pay it forward as well, with Braedan taking an active interest in his younger brother’s cause. In March, Braedan shaved his head at a St. Baldrick’s Foundation event and raised $4,000 for the childhood cancer charity. In late November, the Gallaghers put their own Christmas lists aside and instead brainstormed on how to fulfill requests on the wish list of Cleveland’s Providence House, a crisis nursery in need of basic supplies, such as diapers and baby formula. "Austin immediately suggested we count out the money in our change jar so we could go to the grocery store and start filling boxes," Krissy writes.

Generosity and support have played important roles in Austin's life. When he was first referred to Rainbow Babies and Children’s hospital, the family met Jeffrey Auletta, an oncologist. Krissy said she appreciates that Auletta has always made the family feel involved in decisions, and is honest when he doesn’t have all the answers about their son’s unusual cancer. Bilateral Wilms tumor affects about 20 children in the United States annually, and Austin’s differentiation—his tumor was made up of mainly muscle, which is less responsive to chemotherapy—makes him even more rare.

Despite the illness, Austin’s strength, energy and joy have been evident. According to Gallagher, "He’s been a total trooper." Throughout his stays in hospitals, he loved to run at any opportunity, gleefully leading her through the hallways, while she chased behind him with his IV pole.

Although somewhat shy at preschool, Austin is "rambunctious" at home and at Rainbow, she said, adding that last Christmas, when his hospital room was filled with gifts, he occasionally fired foam darts at hospital workers with his new Nerf guns (In jest, Krissy assured, "He loves his doctors and nurses.")

Austin’s status has improved significantly, and if he’s cancer-free by April 2012, the family might finally be able to use the word cured, Krissy said.

Support from the Rainbow staff and the community has been invaluable, Krissy noted, adding that for every procedure and overnight stay, a friend or family member cooked dinner for the Gallaghers and delivered it to Austin's door.

"I hope he knows he’s lucky every day," she said.

Kelli Fontenot is a journalist living in Cleveland Heights.


Saturday, March 14:
10:00 AM - 11:00 AM - Support for a Child or Teen with Cancer; Including Siblings and Parents MARCH MOVEMENT MADNESS