Swim Cadets "Save the Day" with annual show 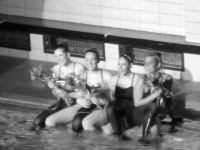 The Cleveland Heights High School Swim Cadets held their annual synchronized swimming show in Heights High’s South Pool, March 4-6. The show was entitled “Swim Cadets Save the Day,” with all music set to the theme of super heroes, super powers, and criminal justice. Songs included “Help” by the Beatles, “Unstoppable” by Santigold, “Kung Fu Fighting” by Carl Douglas, “Zero to Hero” by Hercules, “Fighter” by Christina Aguilera, “Ring the Alarm” by Beyoncé, “Up Up and Away” by Kid Cudi, “Defying Gravity” from the Broadway show Wicked, “Staying Alive” by the Bee Gees, “I Shot the Sheriff” by Bob Marley, “I Will Survive” by Gloria Gaynor, and “Superwoman” by Alicia Keys.

The Swim Cadets began practicing in late October, starting with swimming clinics and conditioning. According to Apple, co-president with Datta, the team practiced six days a week for two hours. As March 4 approached, the Stage Crew and Swim Cadets worked together, organizing music and lights for the show. Stage Crew member sophomore Nathan Adkins felt, “All things considered, the show went surprisingly well.”

Sophomore Peter Eiger, who attended the Swim Cadets show all three nights, noted that the choreography was well done, the choice of music was good, and the show as a whole was very creative.

Apple believed, with the smoothly run performances and positive feedback from the audience, the team’s hard work paid off. When asked what she loved about Swim Cadets, Apple replied, “I love all of the traditions that we have every year. It’s a lot of fun doing what we do.”