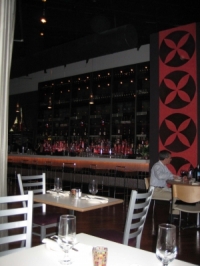 Sandwiched between bd’s Mongolian Barbeque and Phoenix Coffee on Coventry, Bodega made its official debut May 21. Owner and Heights resident Said Ouaddaadaa (pronounced Sy-eed Wadada) is an experienced restaurateur who has been at the helm of Uptowne near University Circle for the past 15 years.

Ouaddaadaa said ambiance and hospitality are two aspirations for Bodega, which serves up tapas, martinis and wine. His complimentary grand opening, which drew an estimated attendance of 400, achieved both as guests were welcomed with a jazz band, sangria and a Mediterranean smorgasbord consisting of chef specials and menu items, such as grape leaves, hummus, curried chicken and aromatic rice.

In advance of the opening, I caught glimpses of the space through sheer drapes at street-level and couldn’t wait to see more. Bodega is very easy on the eyes with its sophisticated color palette, cascading waterfall and dramatic chandelier that greet guests as they enter. The bar features an impressive wine display with a flat-screen television in the corner to accommodate Tribe fans…which is the only element in common with Bodega’s sports-bar neighbors. An elegant, dimly lighted sitting lounge is veiled by a gauzy curtain for privacy from the dining area.

While the menu is on the slim side, consisting of a few salads, soups and two-dozen cold and hot small-plate options, the martini list is a bit overwhelming (in a good way) with 200 choices broken down into categories like classic, cosmos, island frozen margaritas and dessertinis (think liquid Snickers). My favorite of those I sampled over the course of my two visits is the Mello Jell-O (a Jellotini, if you will), which features small chunks of soft, wobbley orange Jell-O. (When I was a kid and my mom wasn’t looking, I used to sneak sips of liquid Jell-O while I stirred it, so I knew this was the drink for me.) Average martini price is about $10.

Bodega’s wine list also is bountiful. Per our server on grand-opening night, 119 are on the menu and the list will grow to 300 varietals from around the globe. Not much of a surprise since according to Ouaddaadaa, a Moroccan native, Bodega means “wine cellar.”

Tapas are priced reasonably and serve one to two people. Based on my visits, I’d recommend ordering four tapas per two people at a minimum.

A filo-dough addict, I couldn’t pass up the warm brie and honey French Cigar ($6) or chicken-stuffed Pastilla ($9) that was beautifully presented with a fragrant sprinkling of cinnamon. The flavorful French Onion Soup ($4) and fresh Caprese ($5) also received compliments from my dining companions. However, the Blue Scallops ($8) were unexpectedly spicy with a Cajun seasoning, which was a bit too competitive with the rich blue cheese for our party. Also, some tapas weren’t served as warm as they could have been.

Ingredients for the “Modern Mediterranean” menu are sourced locally, Ouaddaadaa said, so Bodega can count itself as one of the growing list of Cleveland’s farm-to-fork establishments. Expect to spend about an hour and a half for a leisurely dinner for two.

Service staff were friendly and attentive, although some were more knowledgeable about the menu than others. I noticed a mix of clientele on both visits…twenty-somethings and Baby Boomers integrated easily.

Bodega is a great spot to grab a drink with friends and enjoy a light dinner, without having to huff it downtown to West Sixth. For now, it’s open for dinner only from 4 p.m. to 2:30 a.m. daily, during which guests are treated to live music, consisting of mostly jazz sprinkled in with some Frank Sinatra favorites on Wednesday nights. Bodega will open for lunch in a few weeks.

According to her grandmother, Christina Klenotic is a “good eater” who never met a carb she didn’t like. She enjoys sampling eclectic restaurants, galleries and neighborhoods, which is why she loves Cleveland Heights.